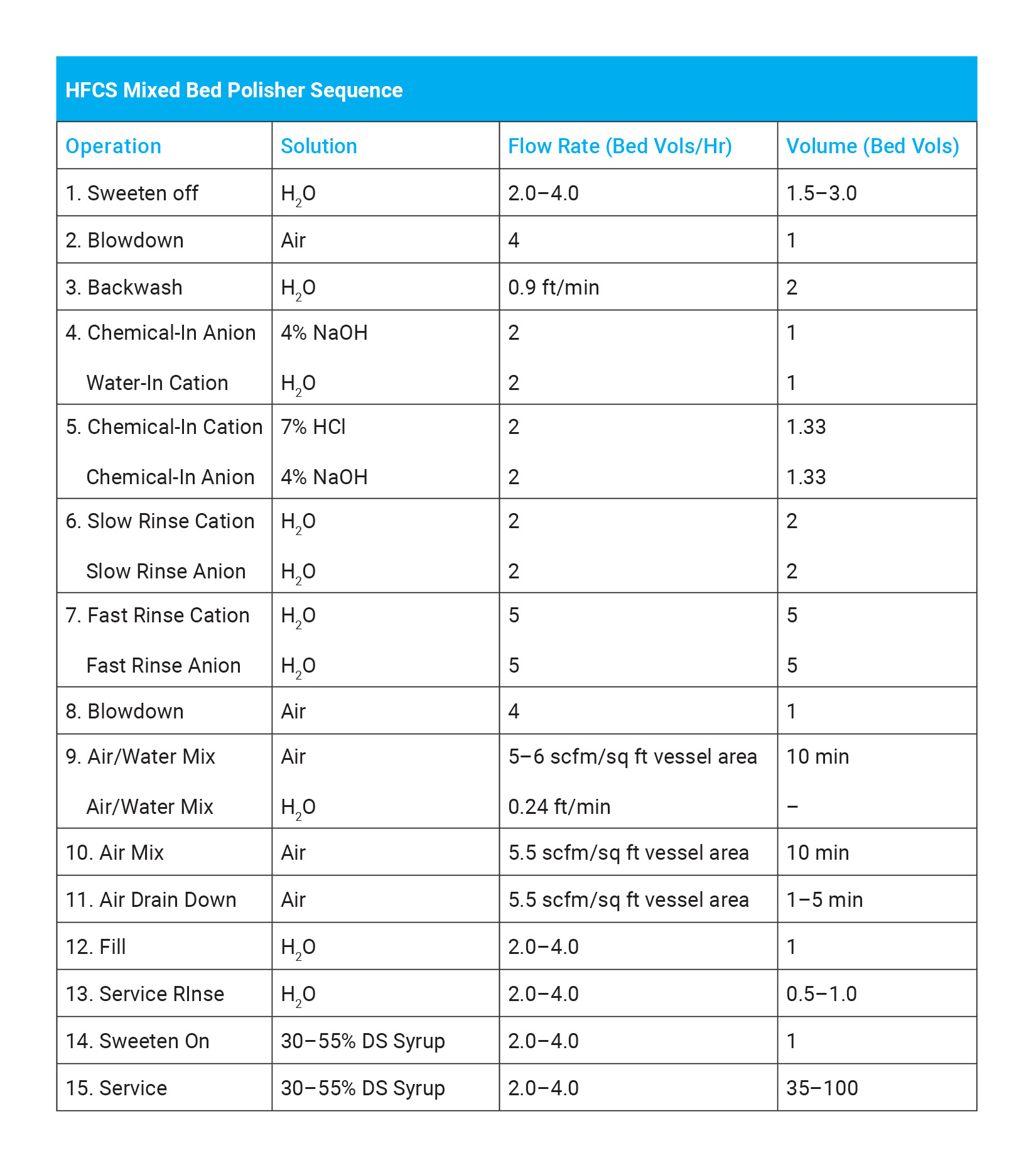 Color, hydroxymethylfurfural (HMF) and residual ash are removed with ion exchange resins from the fructose-rich product before or after blending to 55 HFCS.

Thus, the mixed bed resin volume will typically be 60% anion and 40% cation.

Some degradation of the HFCS can occur in the mixed bed due to contact with the high pH strong base anion resin. Fructose will convert to psichose at elevated pH, so to limit the amount of fructose lost in the mixed beds, the velocity of the syrup is kept high enough to minimize contact time with the anion without affecting the kinetics of the mixed bed exchange.

In service, syrup passes down through one bed of homogeneously mixed cation and anion resin while the second column of the pair is in regeneration or on standby. The primary function of a polisher is color removal, and service is terminated based on color leakage. The conductivity of the mixed bed effluent at breakthrough will be on the order of 1-2 µS/cm. Upon exhaustion of a polisher, the service unit is sweetened off and regenerated while the standby unit is sweetened on and put into service.

To regenerate an exhausted mixed bed unit, syrup is displaced from the resin bed with water, the intermixed resins are separated from each other due to density differences with a backwash and each is then chemically regenerated. The cation resin is stripped of protein and ash with a dilute hydrochloric acid solution while the strong base anion resin is stripped of color bodies, weak acids, ash and HMF with a dilute caustic solution.

Mixed Bed Polishing Regeneration Sequence in Corn Sweetener Refining
Sweeten Off:
Syrup is displaced from the bed of intermixed cation/anion resin by introduction of demineralized water into the feed distributor which pushes the syrup down through the bed and out to sweetwater collection. This step is terminated when the effluent sweetener concentration has decreased to 0.1-0.5% dry solids.

Blowdown:
The water in the freeboard space between the feed distributor and backwash collector is displaced by pushing the water down through the bed with pressurized air until the liquid level has reached the feed distributor point. Evacuation of the freeboard space results in less back pressure and hence a more rapid rise of the bed of mixed resin during the initial minutes of the backwash step. This provides for a better separation of the more dense cation resin from the lighter anion resin.

Backwash/Separation:
Process water is passed upflow through the bed of mixed resins to achieve a 100% fluidized expansion of the resin bed and accomplish a separation of the cation from the anion resin in addition to removing resin fines and particulates from the bed. Owing to specific gravity differences, the anion resin will be fluidized to a greater height in the vessel and settle at a slower velocity than the heavier cation resin. Thus, the cation and anion resin separate into two discrete beds with the resin interface occurring at the same level in the vessel as the interface takeoff distributor.

Chemical-In Anion:
The dilute caustic solution continues to enter the feed distributor located above the separated resin bed and passes down through the anion bed and out the interface collector while a simultaneous flow of deionized water enters the bottom distributor and passes up through the cation resin and out through the interface collector with the spent caustic solution. The 50% excess volume of strong base anion resin requires a regenerant chemical volume in excess of the cation regenerant volume. In order to ensure equal contact times per unit volume of resin, regeneration of the anion resin begins prior to the cation resin.

Chemical-In Cation/Anion:
The dilute caustic solution continues to enter the feed distributor located above the separated resin bed and passes down through the strong base anion resin and out the interface collector while a simultaneous flow of dilute hydrochloric acid enters the bottom distributor and passes up through the cation bed and out the interface collector with the spent caustic solution.

Slow Rinse Cation/Anion:
Demineralized water streams simultaneously enter the feed and bottom distributors and pass down through the anion and up through the cation respectively and mix as they exit the column through the interface collector. The demineralized water displaces the regenerant chemicals from the resins at a rate that ensures that all of the resin receives an adequate regeneration contact time.

Fast Rinse Cation/Anion:
Demineralized water streams simultaneously enter the feed and bottom distributors and pass down through the anion bed and up through the cation bed respectively and out the interface collector to rinse out the residual chemicals from the bed. Due to the excess volume of strong base anion resin, and its higher rinse requirement per cubic foot, it is desirable to rinse the anion resin at a higher rate than the cation resin.

Blowdown:
Pressurized air enters the top head of the vessel and pushes the water in the freeboard space down through the resin until the liquid level reaches the feed distributor point. Lowering the liquid level prevents water and resin from being carried out the vent nozzle during the subsequent resin mixing steps.

Air/Water Mix:
An air/water mixture enters the bottom distributor and flows up through the bed producing a churning action which mixes the resin. The air escapes through a vent while the added water raises the liquid level in the column slowly. The water provides a strong initial hydraulic force to slightly fluidize the resin, so the churning air bubbles will easily affect mixing of the cation and anion resins.

Air Mix:
After the churning action is initiated with the air/water combination, the water flow rate is terminated, and the resins continue mixing through the action of the air bubbling up from the bottom distributor and escaping out through the vent.

Service Rinse:
Demineralized water enters the top distributor and passes down through the freeboard space and through the resin until the effluent conductivity decreases to less than 1 microsiemen/cm. The speed at which the conductivity declines, and the value attained serves as a check against the quality of the regeneration.

The mixed bed polishing equipment typically consists of a pair of food-grade, rubber-lined pressure vessels containing four sets of distributors. The distributors are constructed of stainless steel and CPVC piping wrapped with polypropylene screen and clamped to rubber-lined steel support bars. The vessels contain a flat false bottom for resin support and sight windows in the sidewall for visual inspection of backwash expansion, separation and mixing of resins during regeneration.