We look at how agarose chromatography resins have traditionally been manufactured before discussing new innovations in manufacturing.

Why does uniform particle size matter in agarose chromatography resins?

Are you looking for ways to improve your current downstream mAb purification process? You probably haven't considered how the manufacture of your chromatography resin is having an impact. The manufacturing technique used to produce the most commonly-used agarose chromatography resins in the industry hasn't changed since the early 1960s. That's almost 60 years of no innovation in an industry that is struggling to reduce the bottlenecks in downstream processing. But there is a solution.

At Purolite Life Sciences, we have developed an innovative new resin manufacturing method designed to meet the needs of future chromatography processes by creating agarose chromatography resins with uniform particle sizes. But what does that mean for you as the end-user? And what are the benefits of this new manufacturing method for your applications?

In this blog post we look at how agarose chromatography resins have traditionally been manufactured before discussing new innovations in manufacturing that will enhance your separation and purification processes.

Classical batch emulsification is the current industry-standard method of manufacture for agarose chromatography resins. Developed in the 1960s, this method involves heating the agarose before adding it to a reactor containing a solvent that is usually hazardous, such as toluene. Force is then applied to the reactor to form the particles and it is this shear force that determines the size of the particles. If the stirrer RPM is increased, the particle size will be decreased. However, one of the main disadvantages of this manufacturing method is that the overall size distribution of the particles is relatively broad, and fines (particles smaller than 25 micron) are being formed.

The particles are then cooled, however, they are not yet hard enough to withstand the high pressures that are normally applied during the purification process. Therefore, they have to be cross-linked with epichlorohydrin in order to make them stronger. The fines that have been created during the process now need to be removed as they can cause problems during purification such as high back pressure or clogging of the column thread. This required a time-consuming screening step which works to sieve out the fines. This screening step will account for roughly 50% of the total processing time for the resin, which is approximately 6 weeks. Once this step has been completed, the particles are then functionalized depending on their final application before being QA tested.

This process, although the most commonly-used method, is still a laborious and time-consuming process with long lead times. But the most important downside to this manufacturing method is the creation of a broad particle size range. This is the root cause of many problems you will experience when using agarose chromatography resins in your purification and/or separation processes. A broad particle size distribution causes:

The agarose is also heated and added to a reactor, however, instead of using harmful solvents, the reactor contains a pharmaceutical-grade mineral oil. The agarose is added to the reactor via a membrane can with pores. By applying a vibration to this membrane can, the agarose is pushed through these pores to form uniform particles. These particles are then cooled and cross-linked before being functionalized and packed for QA testing.

Because the uniform nature of the particles is controlled during their creation, it removes the need for the screening step. This manufacturing method means more benefits for our end-users including: But what does it mean to use a resin with a broad or narrow particle size distribution in a column?

Eddy diffusion refers to any diffusion process in which substances are mixed together in a fluid system due to eddy motion. In chromatography, this is applied to column packing in which eddy diffusion is affected by the packing material in the column.

In comparison, packing a column with jetted beads that are more uniform allows particles to travel the same distance and exit the column at very similar times. This creates a narrower elution peak that is more concentrated so overall buffer consumption and cycling time can be reduced.

It is also important for end-users to be able to use the resin for a long time in order to achieve many cycles, however, fouling can often interfere with several cycles.

In classical batch emulsified beads, experiments show that binding capacity drops with each consecutive cycle, which indicated that the particles started to foul and the capacity was reduced (see graph below). Experiments of jetted beads found no drop in capacity at the earlier residence times as per the batch emulsified beads (see graph below). Instead, the capacity started to drop at 8 minutes residence time but overall, these experiments showed that jetted beads are less prone to fouling due to a better flow within the column and therefore, more effective cleaning in place (CIP) and sanitization. 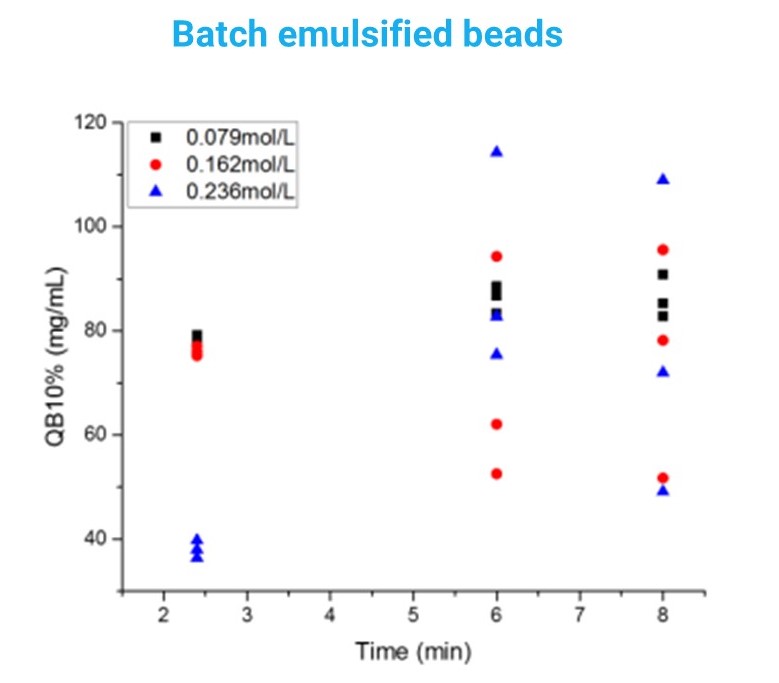 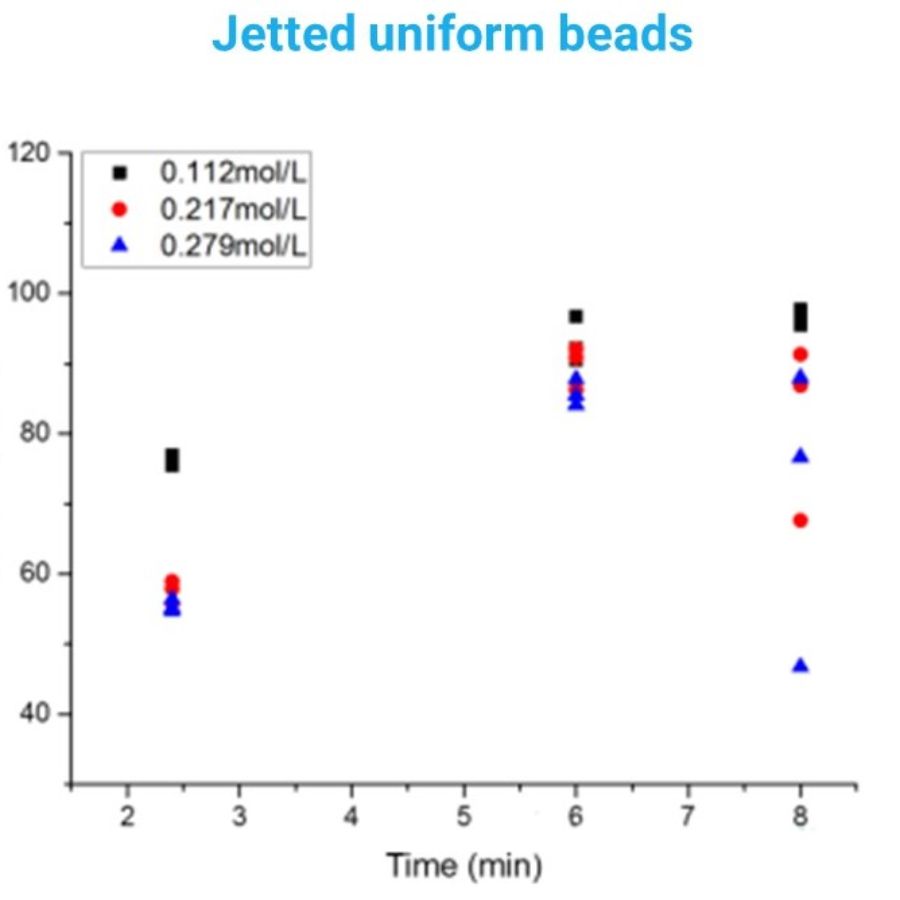 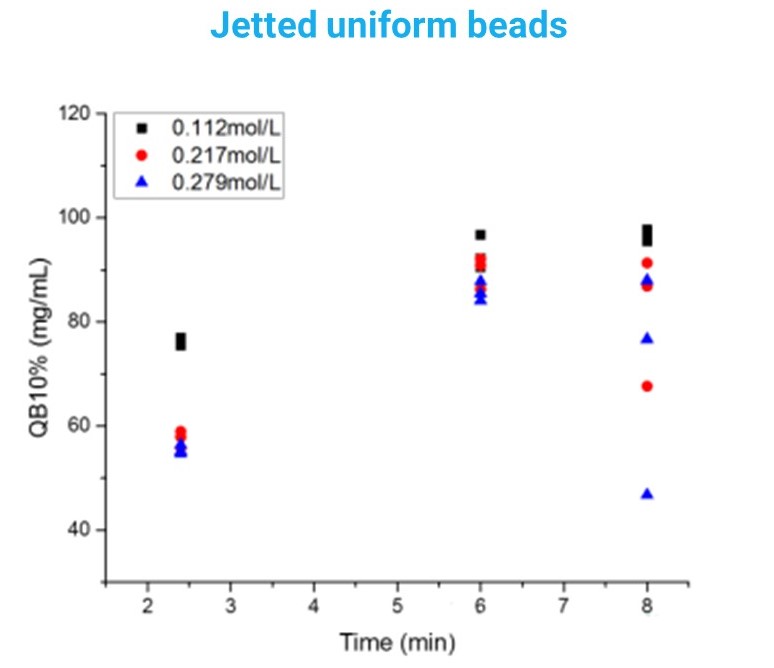 Main Benefits of Uniform Particle Sizes in Column Packing  include::

Conclusion
Innovations to resin manufacture, such as Jetting, mean uniform particle size protein A agarose-based resins are available for the first time, offering a multitude of process benefits whilst improving cost-efficiencies when compared to alternative resin products. In order to meet industry demands for improved productivity and reduced cost of goods, as well as address ever-increasing upstream titres, resins that perform more efficiently within the same manufacturing footprint are a necessity.