Purolite's third bi-annual Cornhole Tournament this fall of 2018, has come to an end.

A winner has been decided for the bi-annual Purolite cornhole competition of fall 2018. Being the third year of the competition, participation and excitement was high. Players from the Bala headquarters were the previous tournament’s winners, so tensions were high around the office to “bring the trophy home.” Likewise, G-street participants were practicing and training to reclaim their trophy of the year before.

At the start of the finals, John Madiraca noted, “Doug Macrone and I (The Bala Sixers) are looking forward to keeping the corn-hole trophy at our Bala office. We are excited to be in the finals against our fellow associates at G-street.” He then warned, “They better beware because the SIXERS are coming to G-Street with two highly skilled players. It should be very fun.”

“The Bala Sixers (John and I) are very excited to represent Bala and keep the trophy here. Even though G-Street has home turf, we know we’ll come out with the W with ease,” boasts Douglas Macrone, John’s teammate and finalist in the championships

The two teams who advanced to the championship met in the parking lot at G street for the final game. In the smaller parking lot on Halloween, the two teams faced off. With only thirteen rounds, the game went quickly, so everyone’s eyes were glued to the players. G-street had a strong lead, but Bala made a huge comeback in the last 3 rounds, heightening the suspense. The game ended with a score of 15 – 16, a 1-point difference that kept us all on our toes. In the end, G-street reclaimed the trophy as the Cornhole Champions, fall 2018! Congratulations to Rick and Scott!

On winning, Rick and Scott comment, “It was a very hard very good game, very evenly matched. We took control and brought the trophy back where it belongs [G-street.] In the beginning, I was worried, we were crushing them. Near the end though, Bala picked up the slack and almost beat us. We had to play hard. What a great game. The trophy is back where it belongs and will stay here.”

Tony Starkus would like the Bala employees to know, “we are building a glass case for the trophy at G-street and will install cameras so you can all look at it from your desktops. We are the first to have our names on the trophy two times. Remember that!”

The games were a lot of fun for both locations. The weather was beautiful on game days, and the sportsmanship has been all fun and games. As an added bonus, the Dos Hermanos Tacos food truck served delicious Mexican fare for the championship. Purolite employees had a blast with cornhole this year!

The Bala teams faced off in the sunny parking lot next to our building. Onlookers and participants jokingly teased the opponents and enjoyed the warm weather. As the games progressed through the day, candidates eligible for the championship slowly started to diminish. In the end, the Bala Sixers defeated last year’s champions, Carolynn Soccio and Jack Dolan of the Bala Bashers. Basking in their victory, The Bala Sixers prepared to defend their title against the G street plant.

In an earlier round, Jack Dolan, former Purolite cornhole champion noted, “It is difficult to accept the loss [to Doug and John], but as long as the trophy remains in Bala, we are all happy.” Maybe they will have better luck next year.

Competitors at the manufacturing facility greatly outnumber participants at the Bala headquarters, and start their competition much earlier in the month. Games for the G-street plant, began on October 8th, with the initial team brackets including: Felix and Antonio, XBbox, Bragging and Bragging, Safetoy Squad, Underdog, 2 Steves, All or Nothing, The Rick and Scott Show, Tim and Tedy, and the Sometimers. They played their games in the parking lot outside the plant. In earlier rounds, 2 Steves beat The Underdogs, and faced off against All or Nothing. Meanwhile, The Rick and Scott Show advanced, crushing Tim & Teddy and the Sometimers. Finally, the Rick and Scott show advanced to the finals.

Even from the beginning Plant Director Warner Jarnigan was confident. “We’re fully expecting our G Street muscle to bring the trophy back home!”

Cornhole is a lawn game in which players place two boards 27 feet away from each other. Opposing teams take turns throwing beanbags at the boards, trying to land on the board for 1 point, or in the “Cornhole” for 3. Players can also cancel each other out by scoring the exact same as the opposition in any given round. After 13 rounds are played, the team with the highest score wins.

Purolite would like to extend a special thank you to our HR department, specifically Anna Luna and Karen Beck for organizing this event, for the third consecutive time in a row.

Congratulations Rick Hinkson and Scott Pfefferle, who not only brought the trophy back to G-Street, but have bragging rights as multi-time winners of the Purolite Cornhole Competition. 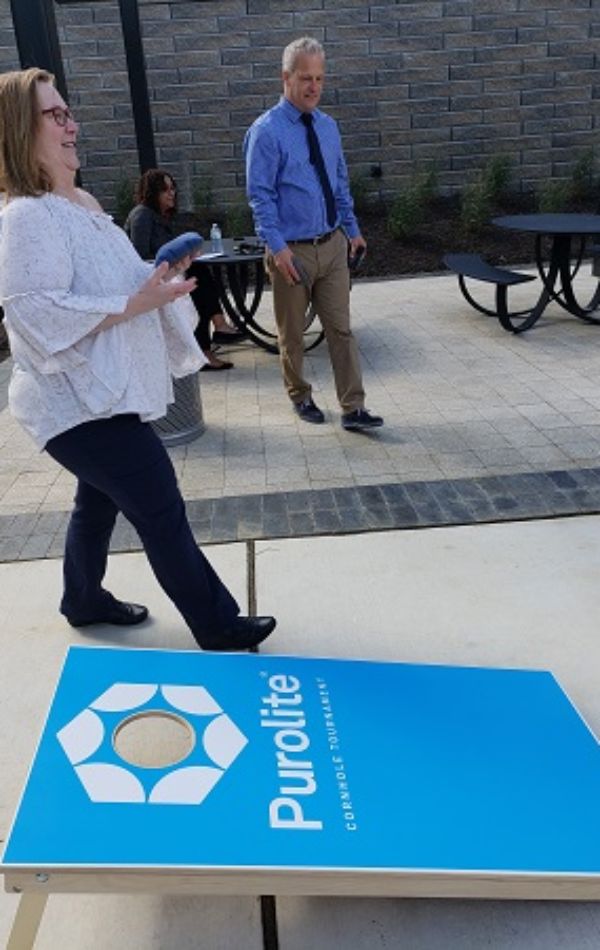 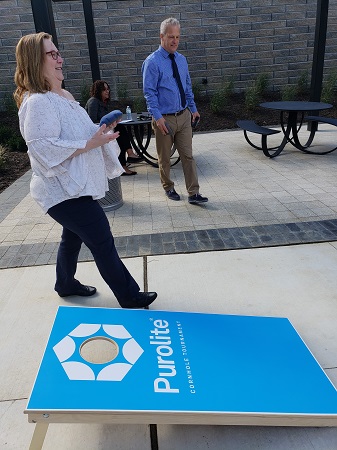 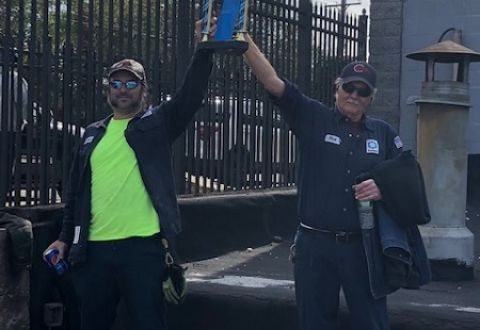 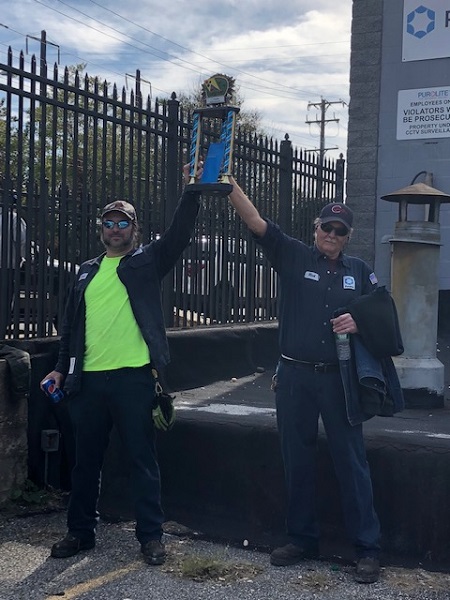 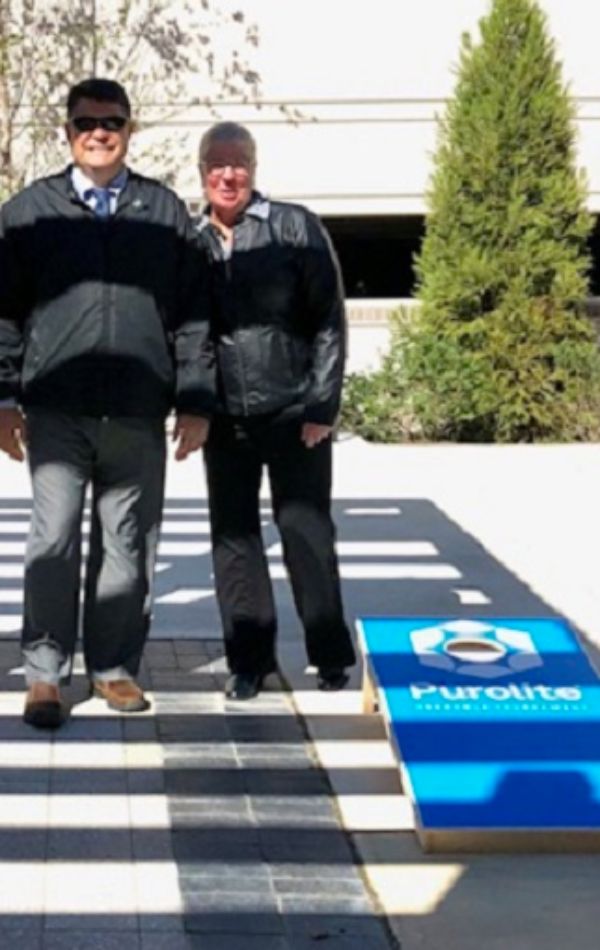 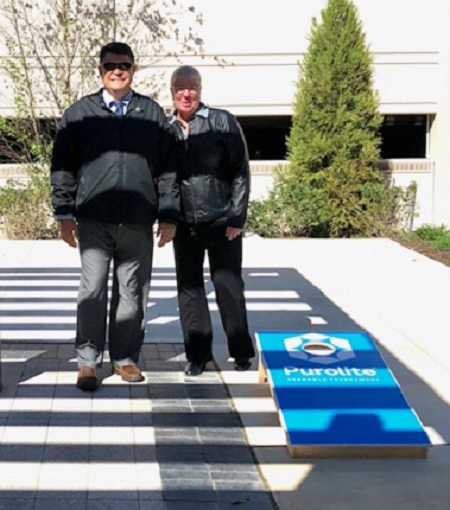 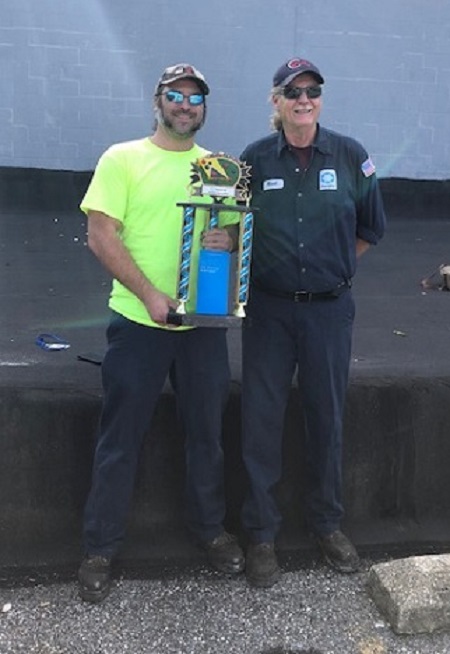 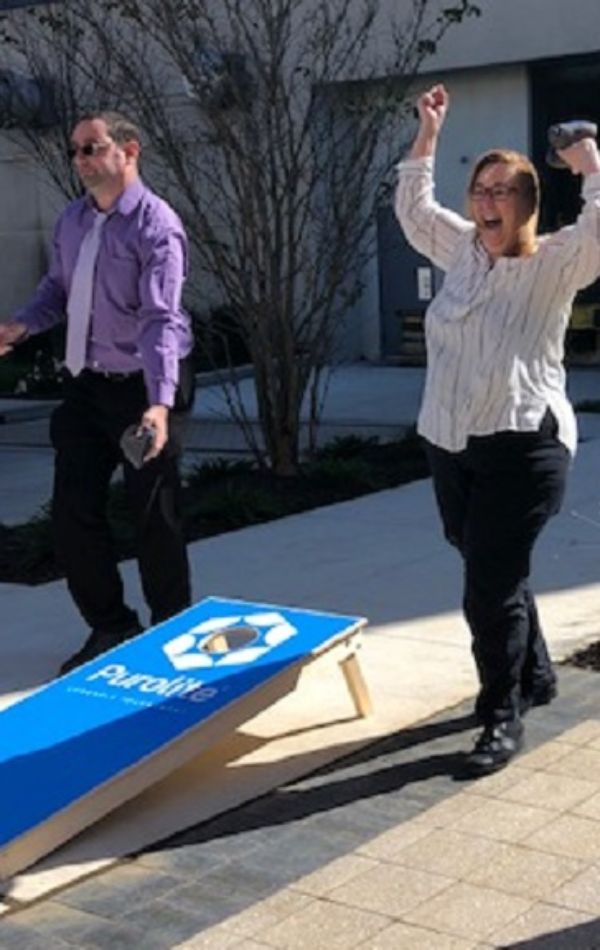 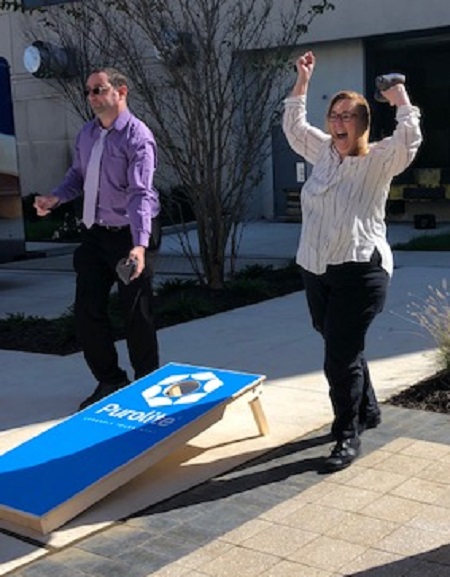 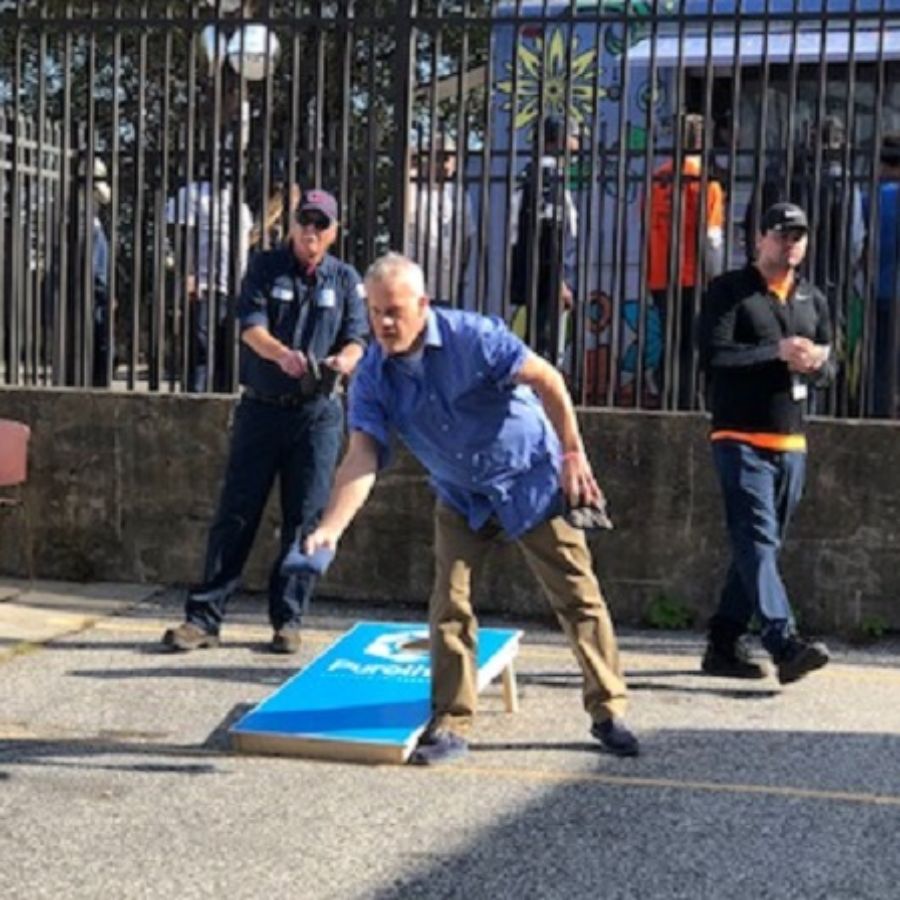 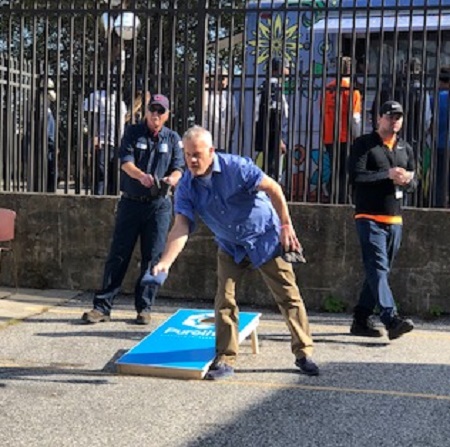 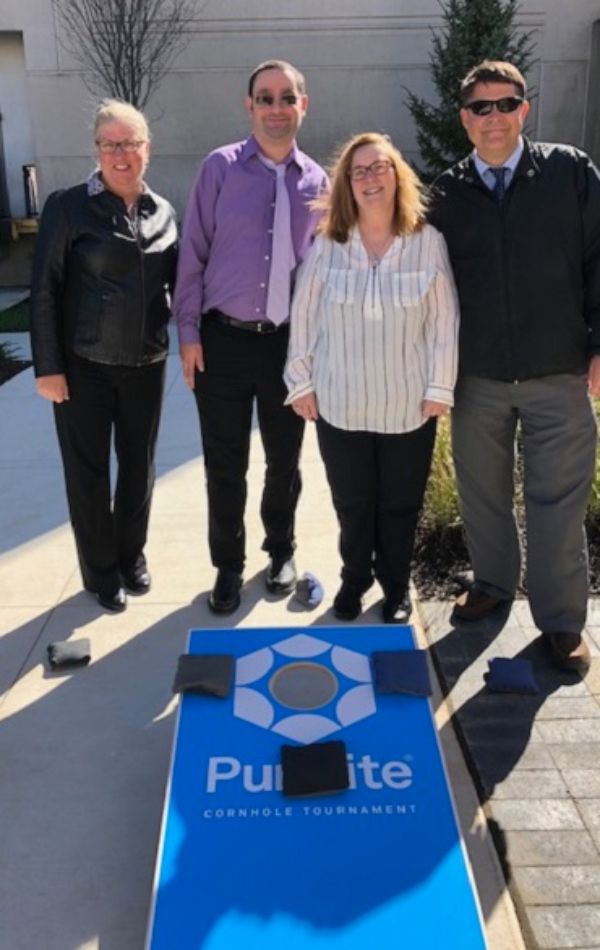 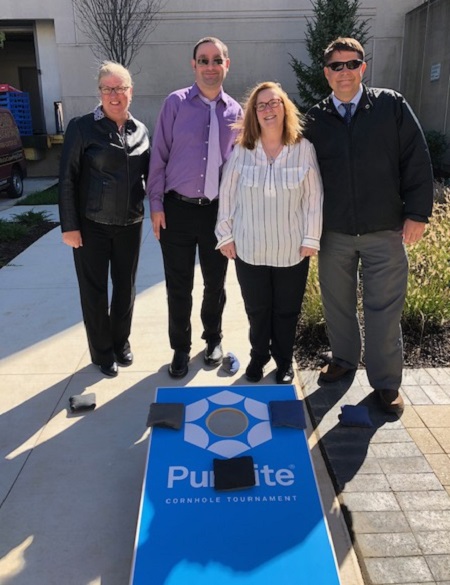 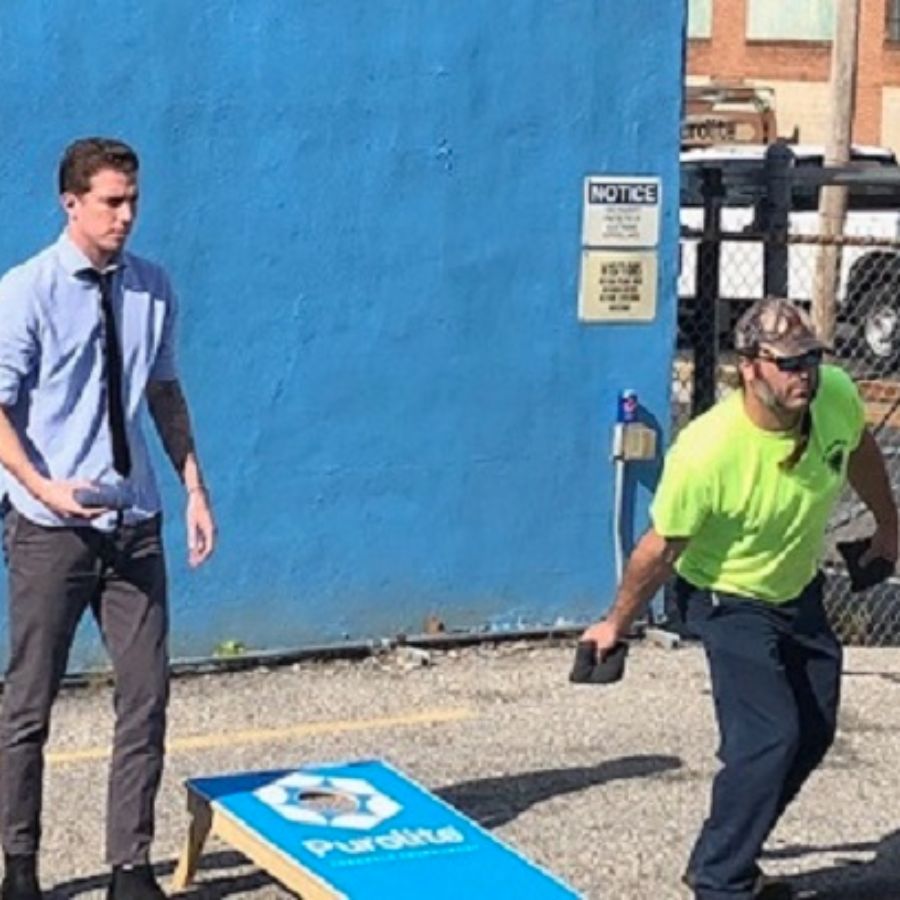 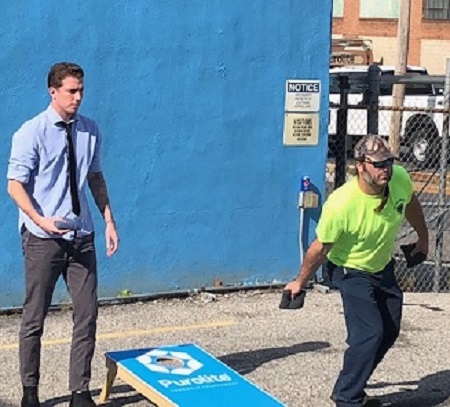 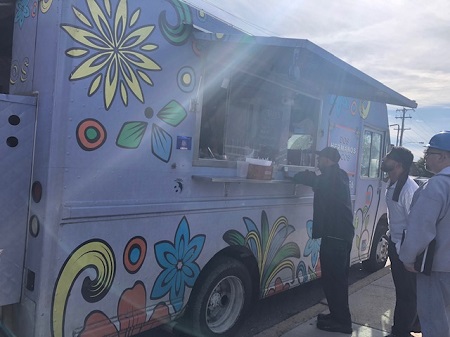