On the chilly Tuesday morning, January 22, Purolite employees from the company’s USA headquarters office shuffled in carrying crock pots, ladles, and bowls. Employees had spent the night before carefully preparing their favorite soup and packing it up to share with their co-workers the next day. The warm scent of hot soup filled the office, seeping out of the conference room filled with various crock pots.

Soup day, a day to enjoy lunch with co-workers, could not have come at a better time. The weekend’s temperatures had hit zero only days before, barely warming up as the week went on.

The small conference room was set up with tables, and extension cords coming out of every available outlet. By 11, a plethora of crock pots sat heating up a variety of soups. Around the table, trays holding bread, crackers, and croutons were generously provided and arranged by Doree Jacobs. Before lunch was officially announced, Doree let the “Bala soup chefs” know to stir their soup and unwrap any accompaniments.

At noon, the long-anticipated lunch began. Employees were in and out of the conference room for the next two hours, filling up bowl after bowl to try all the soup they could. Jason Hsu’s aromatic Daikon Radish soup, Andrea Bartus’ Italian Scripelle ‘Mbusse (Crepes in broth), and Michaela Connolly’s bright squash soup were big hits. On the table to the side, Gayle Reese’s split pea and ham soup, Linda East’s cheesy chicken soup, and Shainie’s taco soup with chips were greatly enjoyed.

“French onion is -hands down- my favorite soup. Couldn’t not make it.” Declared Tom Gigliotti. Tom spent the evening carefully crafting cheesy bread bites to accompany his savory French Onion Soup. Of course, lunch was not complete without a delicious desert provided by Zina Reyes. Zina excitedly unveiled her lemon meringue pie and blueberry cake, which were nearly gone by the end of the day.

“I think I’m on bowl three!” Shainie laughed, to which Carolyn Soccio replied, “who’s counting?” This definitely described the scene in the conference room. Employees spent the cold day dishing up bowls of the hot soup.

Soup day, coordinated by the Human Resources team, is intended to offer the corporate team a warm option for lunch, and time to socialize with their co-workers. Thank you to everyone who contributed by bringing in soup, and a special thank you to Karen Beck, Anna Luna, and the entire human resource team for planning this event. Thank you also to Doree Jacobs, who set up and cleaned up the conference room. Soup Day was a hit!

Purolite wishes you a warm and happy winter! 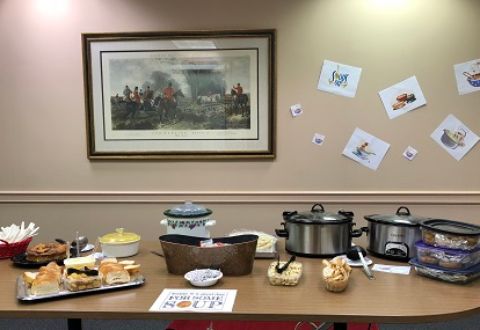 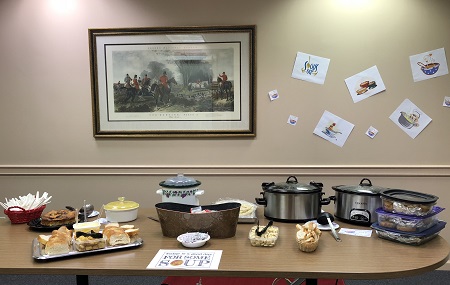 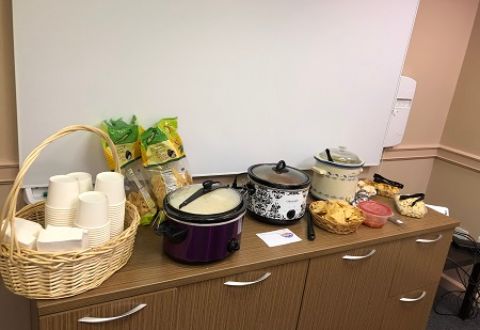 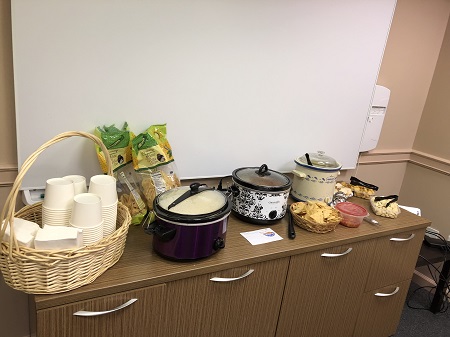 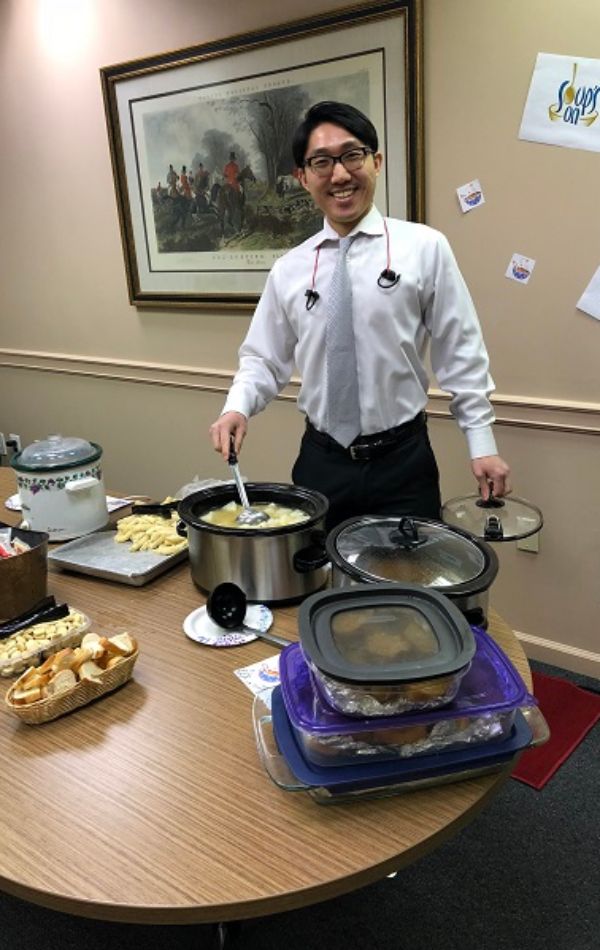 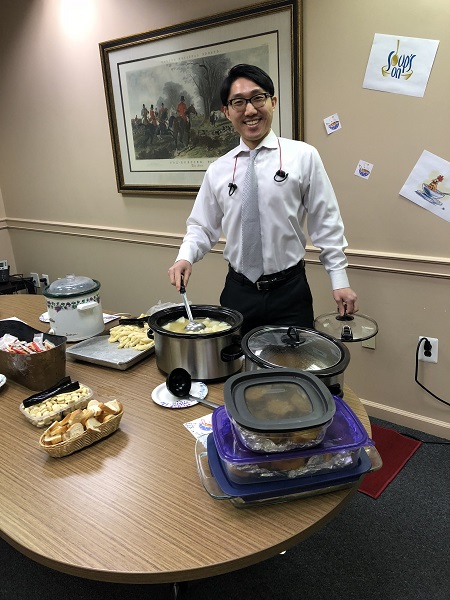 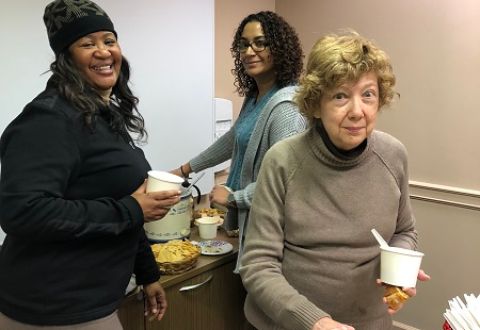 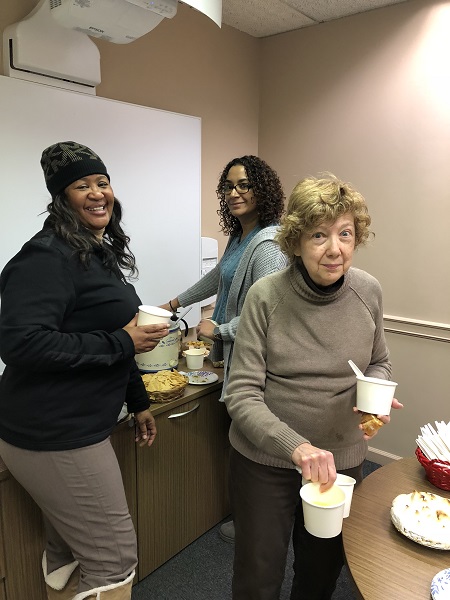 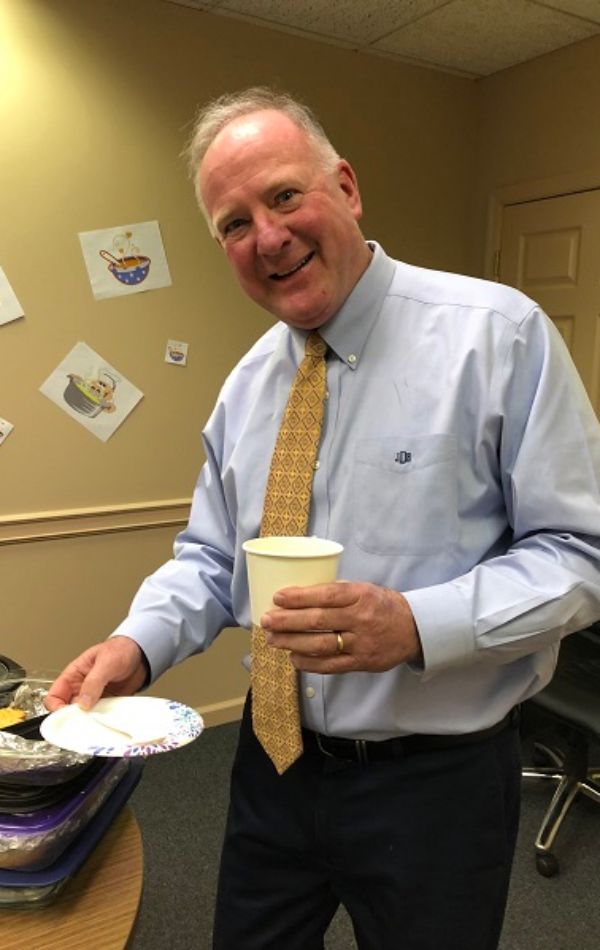 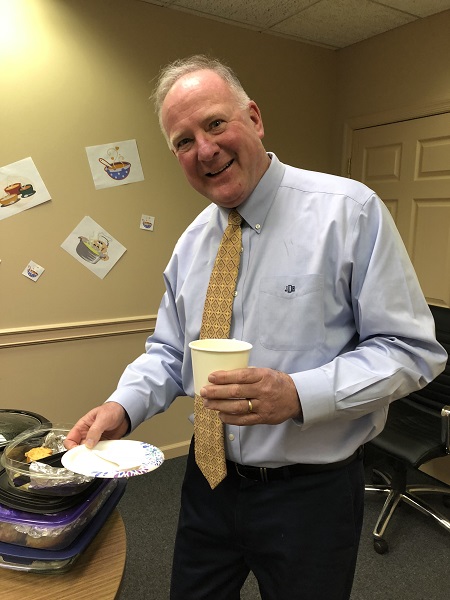 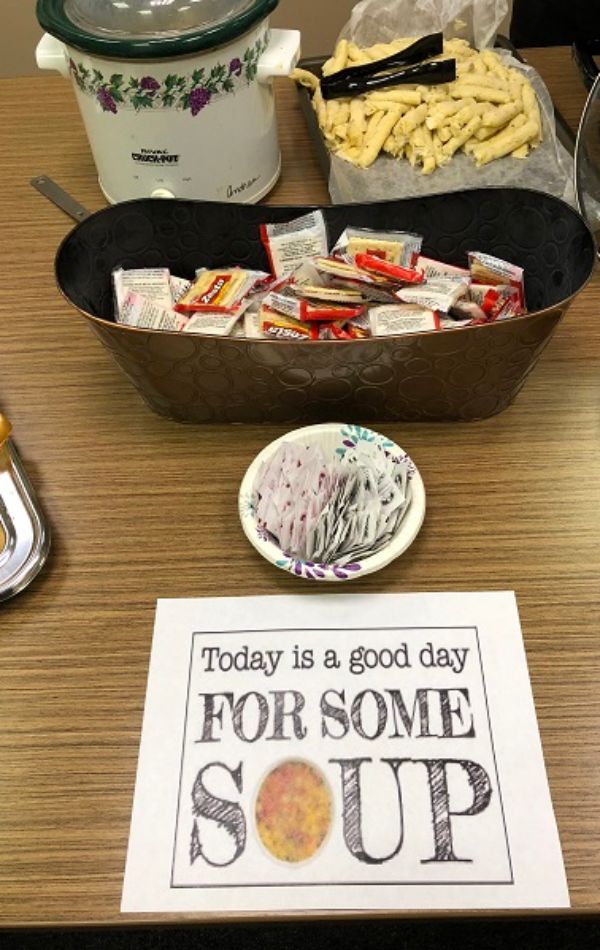 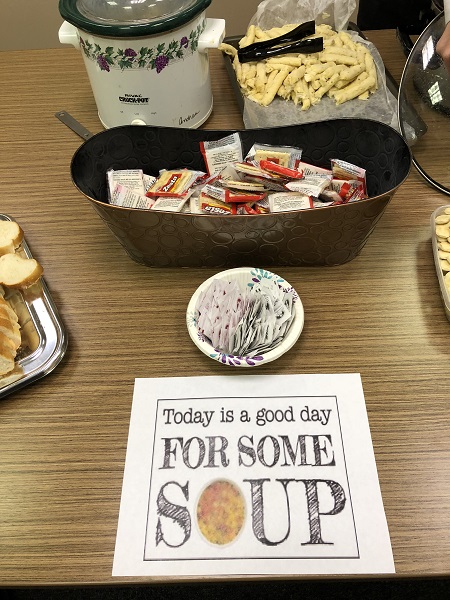 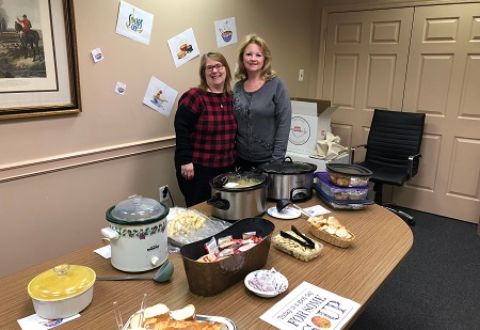 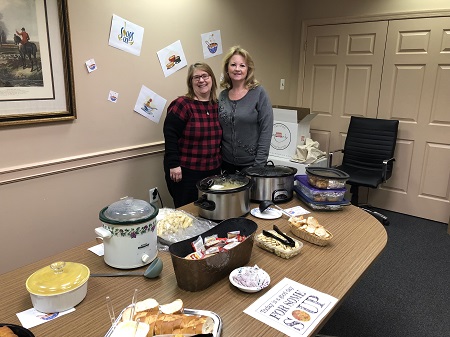 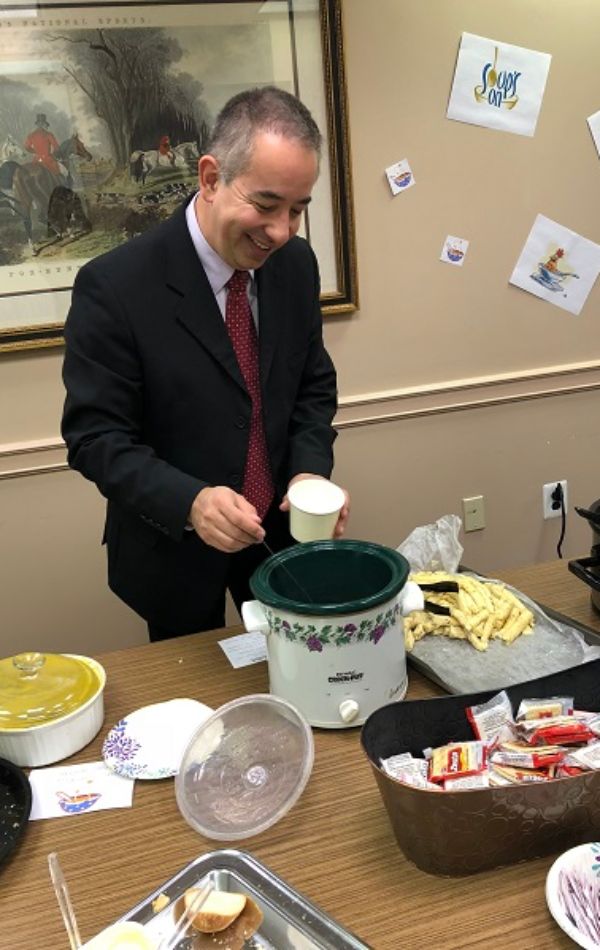 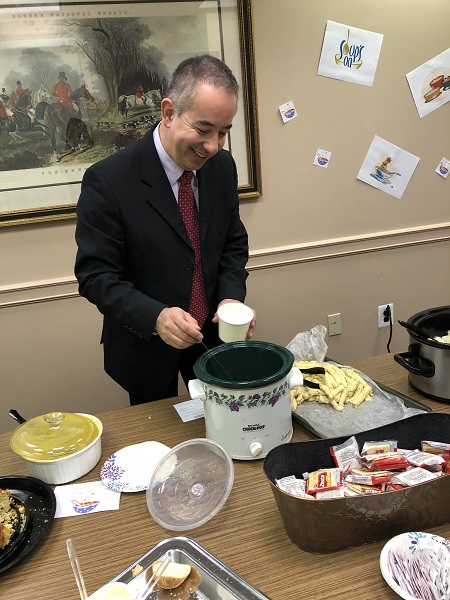 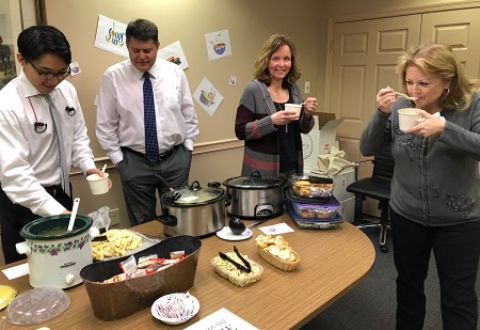 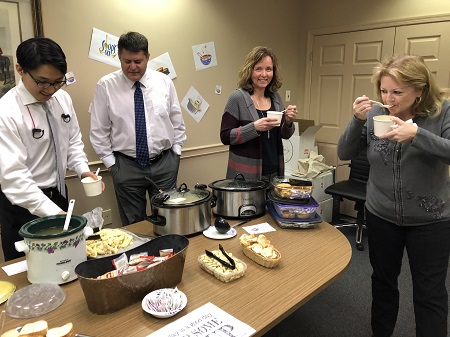 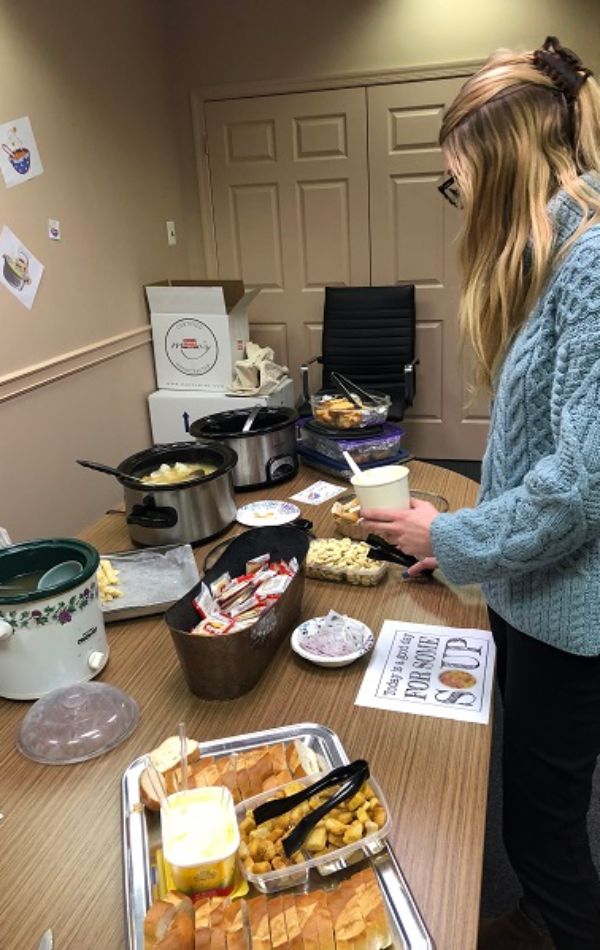 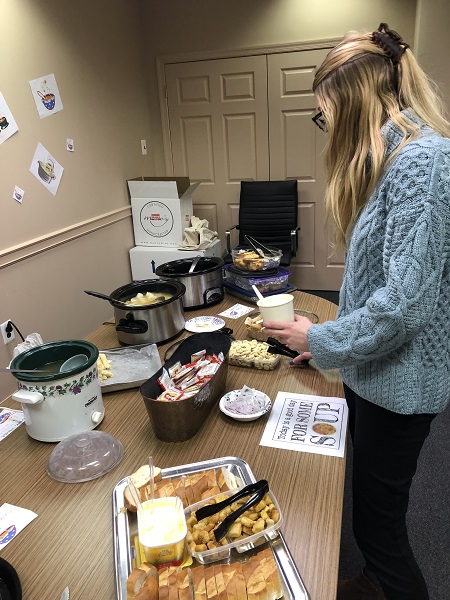